Tribute to My Father

My dad would be 87 today. That seems so old. So much older than the 80 years that he lived before Pulmonary Fibrosis sucked the life out of him. I can't imagine what he would look like today. Had he lived.

The last time I saw my father was in 2000. He had had bypass surgery and almost died. My siblings and I flew down to see him, not knowing if he would make it. He did. For three more years. Alive but compromised, with his faithful oxygen tank following him around like a lost puppy. He said that Pulmonary Fibrosis is like breathing through a straw.

But that last time I saw him I was struck by something. As he was lying there, barely covered by a pathetic excuse of a sheet (there is little effort to maintain dignity in the ICU), I saw my legs on him. MY legs. MY feet. The shape. The way they flop to the sides when I am lying on my back. It was the first time in my then 37 years that I had ever really seen or felt a connection with my father. It was true. I was my father's daughter after all.

You see, I never really knew my father all that well. Sure, he lived with us for a good portion of my childhood but by the time I arrived he was 40 and worn down by work and life and had checked out emotionally from the father/child relationship. I hear that he wasn't always that way. My oldest sister says so.

My father was born Oscar Munroe Wilson, Jr. on September 22, 1923 in Fitchburg, Massachusetts, the only child of (you guessed it) Oscar Munroe Wilson and Virginia Cameron Lashley. He grew up in the ancestral town of Ashburnham, just up the road, becoming an Eagle Scout and the salutatorian of the Cushing Academy Class of 1941. He may have been a pioneer of sorts in the world of latchkey children as his father was a house painter but his mother worked as an RN at Massachusetts General Hospital during the week and drove the 50 miles home on the weekends. His boyhood diary, which I received after his death, hints of a rather lonely existence.

For whatever reason, his dream of attending West Point fell through. He, instead, enlisted in the Navy, studied aeronautical engineering at Alabama Polytechnic Institute (you know it as Auburn) and became a Navy pilot. He flew Wildcats and Hellcats in WWII, while stationed on Saipan, and heaven only knows what he experienced. True to form, he spoke very little of that life, not even to my mother or his second wife. Janie. My parents married in 1946 and he stayed in active duty with the Navy until 1954, certified to fly Lighter Than Air (blimps) as well as Heavier Than Air (airplanes). I think he did some really nifty, fun, secret things but, of course, I'll never know. He took that to the grave.

In 1954 he and my mother moved to Chattanooga, Tennessee, her hometown. He went to work for my grandfather at his construction company and they proceeded to raise a family. Four kids in all. Somewhere along the line things went downhill. My grandfather died, the company sold, and my father got into a new career, teaching Dale Carnegie “How To Win Friends and Influence People” classes. He was home less and less and so it was no surprise when my mother pulled me and my sister Bonnie aside (Anne and John were in college) and told us that they were getting a divorce. It all seemed so matter of fact. I never saw him much any more. I was 14, after all, and didn't need a father anyway.

Over the next couple of weeks furniture started making its way from the house to the garage, preparing for his move. Then, on the Tuesday before Thanksgiving (the handy online calendar says it was November 22, 1977), as Bonnie and I drove in the driveway from school, I saw it. The garage was empty. He was gone. That image has haunted me for almost 33 years. Gone.

Now, he really wasn't gone. He was just gone from my life. I still saw him at Christmas time. He would take us out to eat. He would even call every few months. But it just wasn't the same. Even though I was scared of him my entire childhood. Even though I never knew how to have a conversation with him. Even though he preferred to discipline his rather lively lastborn with a harder hand than I preferred, there was still something comforting about him coming home at night. Even when it was only a few nights a month, like in the last year of the marriage.

It wasn't until I was in college that I started trying to initiate a relationship with him. And as I became an adult we seemed to be able to connect, even if just for a 5 minute conversation, as we found common interests. He was fascinated with family history and weather and he and Janie would even ride out hurricanes in the steel and concrete condo building on Pensacola Bay. And videotape them!

But his willingness to go deeper just wasn't there. I don't know what sort of inner demons he battled. I vascilated between frustration, anger and a realization that he just didn't have the emotional tools to truly connect with people, no matter how much he tried to teach others the tricks. In my more generous moments I would cut him some slack, thankful for the small snippets of time he would afford me. By the late 1990s he and Janie would pass through town once a year and sometimes even stay for four hours. That was the most time I had spent in his presence since the early 1970s. I longed for more but knew to accept what was handed me.

After his surgery and near death in 2000, my father never traveled very far again. He continued to teach his classes, oftentimes on oxygen. By the spring of 2003 he began to say something odd and totally out of character. He began asking, “When are you going to come see me?” Never, ever had he asked me such a thing. It struck me that maybe he thought he was dying. Part of me longed to see him. But part of me was angry. That someone who had shown so little interest in me for years, all of the sudden, wanted me to make the effort to come down and see him, when he had shown so little effort before.

For months I wrestled with the question of how and when. Matt had started his own business and was working 18 hours a day. I was trying to help support the family with real estate. The kids were young. And any interaction with my father generally was enough of an emotional belly flop that I didn't want to go alone.

In late October, 2003, my father mentioned that he had quit teaching. I knew that meant he was going to die. He would never quit teaching unless he was that bad off and not teaching would basically kill him. We made plans to go down to Pensacola. Matt had a press check scheduled for November 20 outside Tallahassee. We would take the kids out of school, go to the press check, and then drive over to Pensacola. I called my dad and shared the news. I was coming to see him. He was thrilled. Really.

On Saturday, November 16, Bonnie called me to say that she had not been able to get in touch with him for a few days. I started calling around and found that he was in one of the local hospitals. That evening Janie called my brother John to let him know that my father was in bad condition. I coached myself over the next few days with the idea that at least he knew I was coming to see him, even if he died, he would die knowing that.

On Tuesday evening, November 18, just hours before we were to leave for Florida, he died. He had told Janie that living was just too hard. She gave him permission to go. So he did.

Images of the empty garage flooded my heart and mind. Waves of regret washed over me. They say everybody grieves differently. I guess they do. But time does often heal and it has been good to get beyond his death and have perspective. I can now lay aside the emotional upheaval and seek to honor him as my father.

Fathers are tremendously important people. We, in our culture, believe the lie that fathers are expendable. Celebrities conceive babies or adopt babies with the explanation that “I don't need a man to complete me”. No, you may not need a man. But that baby needs a father. The statistics are overwhelming. And I can declare this truth from the bottom of my heart. You walk out on your child and it WILL affect them for the rest of their life.


I want to honor my father, but not in a dishonest way. He related to people the only way he knew how. And I think, by the end of his life, he had a lot of regrets. But he was a friendly man. A smart man. A competent man. He was willing to die for the freedom that we take for granted in this country. He did genuinely seem to care about people. He loved clam chowder with crumbled up crackers and martinis and iced tea. He drove only Cadillacs and loved sailing. He could whistle in that funny way you hear in old time, Perry Como-like songs. He chewed Doublemint and Wrigley's Spearmint and Dentyne. He nicknamed me “Gick.” And I miss him. 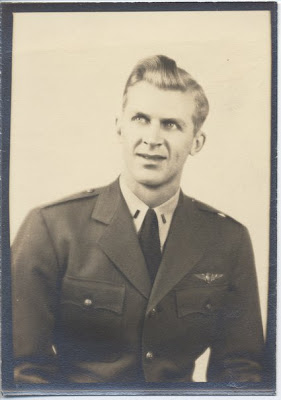 What my blog is all about
(click the quote)